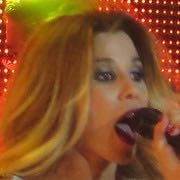 Miriam Doblas Muñoz (born 1 April 1992, Madrid), also known as her stage name Lola Índigo, is a Spanish singer and dancer from Granada. The singer first gained national recognition in 2017, when she placed as sixteenth in series nine of the Spanish reality television talent competition Operación Triunfo. She was one of first participants to be eliminated from the talent show. After exiting the show, the singer signed with Universal Music and released her debut single "Ya No Quiero Ná" which turned into a smash-hit in her country, peaking at number three on the PROMUSICAE musical chart and selling more than a hundred thousand copies. It was certified as three times platinum. Her short but intense musical career has earned her multiple awards such as an MTV Europe Music Award for Best Spanish Act in 2019.